St Mary’s School first opened in January 1920 in one of the old wooden buildings, which was transported from St Joseph’s, Northcote. It was staffed by the Sisters of the Good Samaritan, St. Avellino Robinson and Sr. Hyacinth O’Connor, who lived in Northcote and travelled to Thornbury each day. At first the size of the school buildings allowed for only children in the lower grades to be admitted. The roll call amounted to fifty-six boys and girls combined.

As the population increased, the school expanded. In February 1925 Archbishop Mannix laid the foundation of a new brick school building, which was later blessed and officially opened by Bishop McCarthy of Sandhurst. 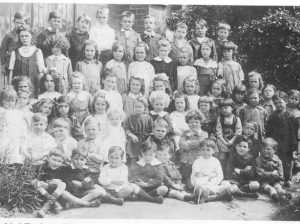 By that time 300 pupils were enrolled and classes extended to Grade 8. By 1931 figures available show that the total enrolment had risen to 548. In May 1949 there was the official opening of a new twostorey building comprising three classrooms, staff amenities and a large Assembly Hall.

The opening of Holy Spirit in East Thornbury in 1952 relieved some of the pressure on St. Mary’s school. Still, in 1958 the average class size was 76. In 1960 the total number at the school had reached 610, with an average class size of 78. The school celebrated its golden jubilee in 1976. A large crowd of ex-pupils and Sisters of the Good Samaritan attended a mass with refreshments later in the hall. The first lay principal of the school, Miss Maria Minto, welcomed all to the celebration. During the following years Miss Margaret Duggan, Mrs Maria Mercadante and Mrs Maria Borley would also serve the school community in the role of principal.

St. Mary’s Parish bought the property between the School and the Convent in July 1987. The house was demolished and the main school building was extended, to provide a new library, tuck shop and toilet block. In 1995 work was begun to add a second floor to the library. The lower floor then became a computer laboratory, while the upper floor became a new library. Fr. Medici, St Mary’s Parish Priest, blessed the extensions and welcomed the school principal, Mr Lou Godfrey, in 1996.

The new millennium brought more changes to St Mary’s as the school celebrated it’s 75th anniversary and launched at Christmastime, an amazing new annual community event called Walk Through Bethlehem. 2003 saw major building extension and refurbishment works taking place with two new classrooms being built over the top of the adventure playground and all classrooms enjoying the convenience of computer networking. This building work was officially opened in 2004 by the Director of Catholic Education, Ms Susan Pascoe. All the windows in the school were replaced during 2006 and in 2007 new reverse cycle heating and air-conditioning units were installed into all the classrooms. Another major building project during 2008 provided the school with a new elevator from the yard to the top floor of the school.

The school enjoys an increasing enrolment with a projected increase to the school population in the immediate future. The school continues to provide excellent primary education and faith development for the children of Thornbury.

The school has completed an extensive building and renovation program which will equip the school for 21st century learning.